Includes fully affordable projects in Mattapan and the North End 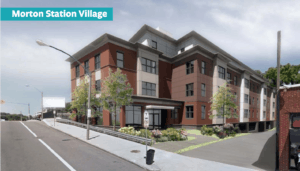 Boston –The Boston Planning & Development Agency (BPDA) Board of Directors approved nine new development projects at its October meeting. The projects will generate 193 residential units, including 81 total affordable units, and 885 jobs once construction is complete. Two of the projects approved, 41 North Margin Street in the North End and Morton Station Village in Mattapan, are fully affordable, generating 63 of the 81 affordable units approved at this meeting.
In addition to the development projects, the Board approved a two-year pilot program for a Compact Living Policy and an Interim Planning Overlay District (IPOD) for East Boston. A result of the launch of PLAN: East Boston this summer, the IPOD is an interim zoning tool that is used to maintain increased public review and community voice in the evaluation of proposed new development during the planning process.
These initiatives and the approved units build on Mayor Martin J. Walsh’s updated housing targets, announced this fall to meet Boston’s population growth by supporting the creation of new affordable housing, increasing access to homeownership opportunities, and preventing displacement of residents.