Boston – The Boston Planning & Development Agency (BPDA) board of directors approved two new development projects and one Notice of Project Change which will result in new market-rate and income-restricted residential units, economic development, and jobs across the city of Boston.

Located on a city-owned parking lot in Roxbury, 40-50 Warren Street will build a six-story building with 25 rental units, all of which are income-restricted. The project will also include over 15,000sf of co-working and ground-floor retail space, and a total of 30 bicycle parking spaces. 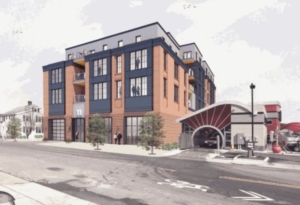 11 Faneuil Street in Brighton will construct a four-story, 41,525sf building, containing 42 homeownership units, six of which are income-restricted. Located within walking distance to many shops and restaurants, the project is expected to invigorate this section of Brighton and bring greater amounts of residential foot traffic to the neighborhood.

The BPDA also approved a Notice of Project Change for 5 Necco Street and 15 Necco Street in Fort Point, that will increase the total square footage of the 15 Necco Street building and eliminate the parking associated with the project. The previously approved project included the occupancy of the General Electric Company in both buildings, however, GE will now occupy space only in 5 Necco Street.