Boston – The Boston Planning & Development Agency (BPDA) board of directors this month approved development projects in neighborhoods across the city of Boston, which will result in new residential units, economic development, and jobs.

The projects approved this month will create an additional 625 residential units, 433 of which are income-restricted, representing nearly 70% of total units.

Parcel P-12C, located at 290 Tremont Street, is a mixed-use development that will bring 168 residential units, all of which are income-restricted, including 63 home-ownership units and 105 rental units, to a BPDA-owned parking lot in Chinatown. It will also include retail space, and community space which is anticipated to be used as a Chinatown branch of the Boston Public Library.

The newly-approved 6 Glover Court will bring a five-story residential building with 34 home-ownership units, six of which are income-restricted, to South Boston. It will create 50 construction jobs and includes $190,000 in community benefits for public realm and infrastructure improvements.

Newly approved 100-110 Lincoln Street will construct a five-story, 43,180sf building containing 32 home-ownership units, four of which are income-restricted. There will also be 27 parking spaces and 54 bicycle storage spaces, and the project will create 50 construction jobs.

Developed by 2Life Communities, the J.J. Carroll Redevelopment located at 130 Chestnut Hill Avenue in Brighton will construct an approximately 180,000 gross square foot, five- and six-story building containing 142 rental apartments, all of which are income-restricted housing for seniors. It includes a center for community-based care, pick-up and drop-off areas for van transportation, and covered and secure bike storage.

Consistent with PLAN: Mattapan, 150 River Street will construct a three-story building with 30 income-restricted rental units for seniors on now vacant, city-owned land. The building will also contain 1,500sf of common area, a 6,000sf publicly-accessible shade garden and a community room. It will create 15 construction jobs.

282-308 Bremen Street will bring 145 residential units, 21 of which are income-restricted, to East Boston. The 110,000sf building will also include more than 3,000sf of retail space, over 2,155sf of artist workspace with gallery programming, up to 61 parking spaces and 145 bicycle storage spaces. 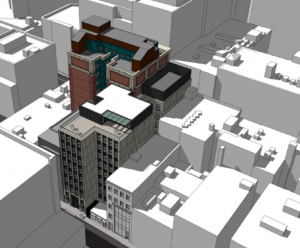 The board also voted to amend the agency’s license agreement with Boston Waterboat Marina to allow for short-term docking, passenger loading and disembarking of seaplanes at Long Wharf for a one-year trial period.