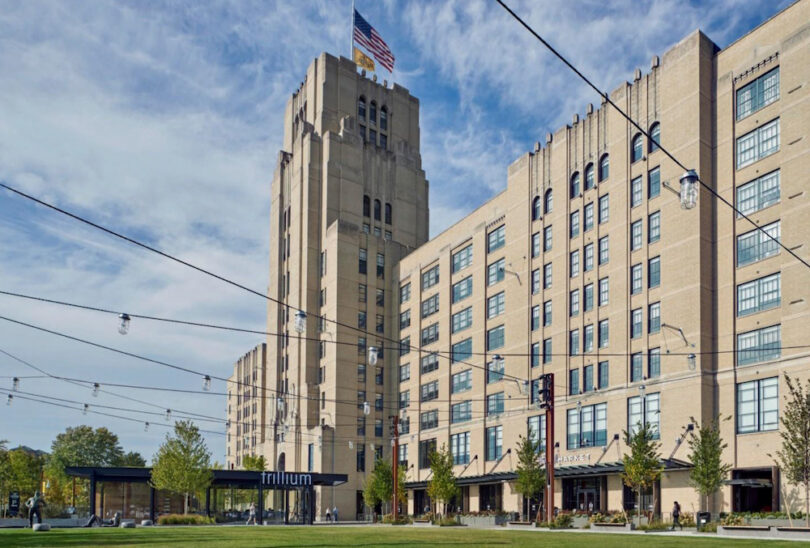 The art-deco building at 401 Park originally opened in 1928 as a warehouse and distribution center, was designated a Boston Landmark in 1989, and was added to the National Register of Historic Places in 1991. Over its almost 100-year lifespan, the Landmark Center has experienced vacancies, threats of demolition, and the transition of a changing neighborhood.

Suffolk was contracted for a preservation-friendly renovation of the first two floors and parking garage of the Landmark Center, honoring the building’s history while revitalizing the site as a dynamic community space. The scope of work included removal of a parking lot to accommodate a new one-acre park, which hosts a winter ice skating rink, as well as core-and-shell space activating common areas on the garage level, ground-floor lobby, and second-floor atria and lobby. Details such as a custom-designed railing with Boston-centric names and places helped this reinvented space pay homage to the building’s industrial character and prominence as a Boston landmark. The project had three goals: honor the long history of the 401 Park building, connect Boston’s Fenway and Longwood Medical neighborhoods, and transform the space into a vibrant hub for workers, residents, and visitors.

Each year, the BPA honors outstanding achievements in historic preservation and compatible new construction in Boston. This year, the Preservation Achievement Award recognized only six projects for their positive impact on the city’s built environment.