The specialized program was initiated to create more skilled workers and additional jobs and drive economic activity in synergy with Boston’s vibrant visitor economy. The program also provides Local 25 members with advanced skills to maximize their earning potential and keep pace with changes within the trade show industry. 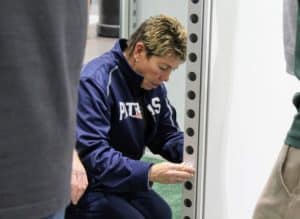 During the two-day program, nearly 200 workers received hands-on training as instructors detailed the art of building and deconstructing trade shows quickly, efficiently, and safely. The unique training program is made possible by Teamsters Local 25 in partnership with the Massachusetts Convention Center Authority (MCCA), Massachusetts Department of Public Safety, and convention and trade show employers.

“This training program is an investment in our members and in the City of Boston,” said Teamsters Local 25 President Sean M. O’Brien. “Having an educated and well-trained workforce is critically important for Boston to attract the large events with the biggest economic impact.  Working collaboratively with great partners such as MCCA, we can make Boston a top destination for the most lucrative trade shows and give our members the skills needed to advance their careers and better support their families.”

Until recently, Boston’s trade show industry was predominantly seasonal, and not large enough to support more than an on-call, part-time workforce.  By making this training available, Teamsters Local 25 is providing workers with a chance to earn certifications and licensure in handling the various aspects of working in the trade show industry.

A skilled trade show industry workforce will allow Boston to compete in attracting the highest performing and most coveted conventions and trade shows. The training will also create more full-time employment opportunities.