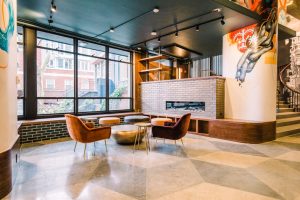 Boston – Kaplan Construction, a WBE general contractor and construction management firm, announced it has completed renovations for the Revolution Hotel, converting a former hostel into an urban boutique hotel located at 40 Berkeley St. in Boston.

Designed by Prellwitz Chilinski Associates, Inc. of Cambridge, the hotel was built within the existing walls of one of America’s first YWCAs. 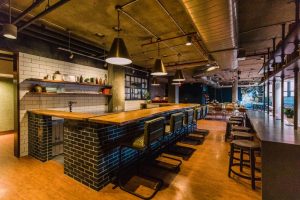 Located in Boston’s chic South End within walking distance to the Back Bay, the hotel is the first Boston addition to The Mount Vernon Company’s collection of independent lifestyle hotels and showcases the city’s revolutionary past. The 163-room hotel delivers an affordable alternative for value-minded travelers seeking affordable access to Boston’s many attractions and experiences. 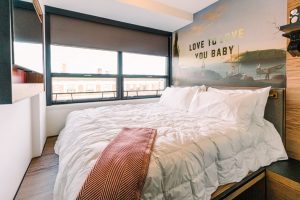 Hotel guests have a number of options: rooms designed for single, triple or quad occupancy, some with ensuite baths and others with a spa format bathroom located at the end of each hallway.

Kaplan upgraded many other interior features of the existing building, including energy-efficient windows, amenity areas, and a lobby which showcases custom concrete flooring and a custom mural. Exterior work included a full roof replacement and improvements to the private courtyard.

The company also did a full fit-out to accommodate a basement bar, lounge, and fitness room. The bar and lounge functions as the co-working space Conspire during the day. The hotel is now open to the public.