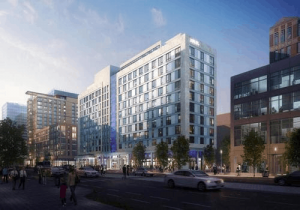 Boston – The Boston outpost of the Yotel brand is introducing compact yet luxurious hospitality to the Seaport District.

Yotel operates micro hotels in Europe and New York City, and identified Boston’s Innovation District as ripe for its compact yet luxurious approach to hospitality. With rooms at this location ranging between 160sf and 200sf — half the size of traditional rooms at nearby hotels — Yotel provides guests with a novel experience and spaces that fuse form with function at an affordable price point in one of the city’s hottest neighborhoods.

As Yotel sits on a parcel adjacent to the Fort Point Channel Historic District, the architects were challenged to thread the modern volume into its historic context. The hotel’s lobby aligns with the existing grid of streets to create a promenade through the building that preserves sightlines and pedestrian pathways from Seaport Boulevard to the historic district.

In homage to the 19th-century warehouses in the district, the rear elevation, which abuts the historic district, is clad in brick to harmonize with surrounding structures.