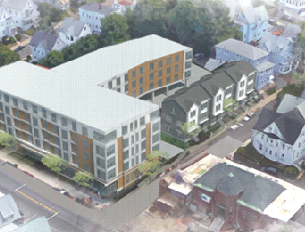 Everett, MA – MassDevelopment has issued a $9,143,000 tax-exempt bond on behalf of St. Therese 4% LLC, an affiliate of The Neighborhood Developers, Inc. (TND), which is using bond proceeds to buy, clear, and prepare a site located at the intersection of Broadway and Gledhill Avenue in Everett on which it will build a 33-unit affordable rental housing facility for seniors.

St. Therese will include a community room, fitness room, common laundry, central air conditioning, and 58 surface parking spaces. The facility will be part of a larger mixed-use project that will include an additional 44 affordable rental units, six three-bedroom homeownership units, and a senior-focused health care center operated by East Boston Neighborhood Health Center.

In addition to the tax-exempt bond, MassDevelopment assisted the Massachusetts Department of Housing and Community Development (DHCD) with the approval of federal low-income housing tax credits, which will provide approximately $5.5 million in equity for the project. DHCD also awarded subsidy funds in support of both this 33-unit project, as well as the adjacent 44-unit rental development.