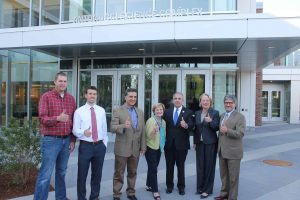 Boston, MA – BOND recently celebrated the dedication of Fitchburg State University’s Antonucci Science Complex. The $57M complex is composed of the newly renovated 45,000sft Condike Wing and a new, 55,000sf addition, both of which were delivered by BOND.

The Antonucci Science Complex is named after President Robert V. and Jeanne S. Antonucci. Robert Antonucci has served as president of Fitchburg State for 12 years, and will retire in June. He has devoted his tenure to investing in improved campus facilities and infrastructure, developing a new strategic plan, and completing an unprecedented number of major capital projects, including the Science Complex. Jeanne Antonucci is a former educator and Fitchburg State alumna who has acted as a tireless ambassador for the university throughout her husband’s presidency.

Originally constructed in the 1960s, the university renovated and expanded the Condike Science Building to provide students with a new integrated science facility for the chemistry, biology, physics, and geophysical science disciplines. The result is the 100,000sf Antonucci Science Complex that provides Fitchburg State faculty and students with modern, state-of-the-art classroom and laboratory amenities.

The first new academic facility on the Fitchburg State campus since 1963, the complex was made possible through funding by the commonwealth through the Division of Capital Asset Management and Maintenance (DCAMM).

BOND delivered this significant renovation and expansion project in close partnership with CBT Architects. The team’s collaborative use of BIM facilitated the smooth integration of complex laboratory MEP systems into the building, and provided many budgeting, scheduling, and constructability insights throughout the project.

The two-phased project was completed on an extremely topographically challenging site, requiring extensive enabling prior to the construction of the building’s addition. Once the facility’s expansion was complete, the team utilized the addition as swing space to allow for the renovation of the Condike Wing. Strict attention to safety and quality resulted in a premier, LEED Silver-certified building for Fitchburg State University.

“The Antonucci Science Complex epitomizes a 21st century atmosphere for learning,” said Robert Murray, BOND president. “BOND is thrilled to provide the Fitchburg State campus with a modern building designed to match the ever-changing needs of the university’s scientific curriculum.”