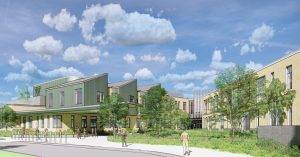 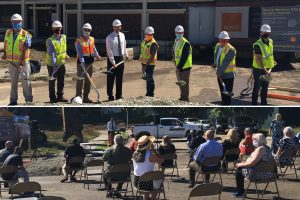 Spectators watch as ground is broken on the new Maria Chapman Middle School in Weymouth.

Designed by HMFH Architects, the project includes the demolition of the existing Maria Weston Chapman Middle School, originally built in 1961, with the exception of the gymnasium which will be fully renovated.

Hill International Inc. is serving as the owner’s project manager.

The total square footage of the new school is approximately 252,170sf with 31,290sf of the existing gymnasium and ancillary areas renovated to serve as the new school’s primary and alternative physical education spaces that include locker rooms, extensive gym storage, occupational therapy and physical therapy spaces, the kitchen, and main loading and receiving spaces.

An additional 220,880sf of entirely new construction will complete the new school. The two-story building will house students in grades six to eight totaling 1,470 students with three academic wings located around a centrally shared space which doubles as a dining room. There is also an administration/auditorium wing with areas for music, art, and a makerspace.

The demolition, new construction, and renovation will take place in close proximity to surrounding neighborhoods. BOND Building approaches projects with a laser focus on safety and minimizing disruption and has implemented a noise mitigation and dust control plan, a traffic management plan, and a community outreach and notification schedule.

The project is set to be completed in July of 2022.