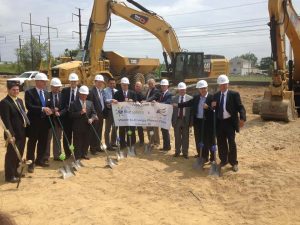 “We welcome Blue Sphere Corp. to the town of Johnston, and we are appreciative of the fact that they have put their faith and trust into our community,” says Joseph M. Polisena, mayor of Johnston, at the ground-breaking event.

The Blue Sphere facility will produce 3.2 megawatts of clean energy from uneaten food that would normally end up in local landfills. That electricity will then be sold to NG to provide power to local homes and businesses.

This project is a joint venture with an affiliate of York Capital Management to develop, construct, and operate a 3.2 MW biogas generation facility in Johnston.

Blue Sphere has committed to compiling a team of locally based consultants and contractors. The project team includes other local companies such as A-Z Corp, Pare Corporation, and Douglas Construction.

Orbit Energy, Inc., based in Raleigh, N.C., codeveloped the project.

“This facility is the ultimate landfill because we take waste in the front end and nothing coming out.  There’s no smell just electricity and compost,” said CEO Shlomi Palas.

Blue Sphere generates electricity from biogas derived from organic waste, which is mostly food waste, and sells this electricity to leading electric companies through long-term power purchase agreements. Waste-to-energy is one of the fastest growing segments in the renewable energy markets. According to SBI Energy, the thermal and biological segments reached $6 billion in 2012 and will reach $29 billion by 2022.

Blue Sphere has made arrangements for the inclusion of two of Orbit’s high solid anaerobic digester units to work in parallel with the digesters of Austep S.p.A., the Project’s EPC contractor, subject to the fulfillment of certain conditions.

This project is the first of its kind for Rhode Island and required collaboration with state and local agencies to navigate through regulatory challenges as quickly and efficiently as possible.

“One of the biggest technical challenges to overcome was obtaining a sewer connection permit for the project,” said Chris Duhamel, Vice President of DiPrete Engineering. “With instrumental help from the Town of Johnston Mayor Polisena and the Narragansett Bay Commission Executive Raymond Marshall, a solution was achieved for the option to tie Bluesphere into the Narragansett Bay service district.”