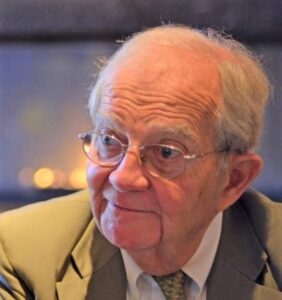 Hingham, MA – Blasdel A. Reardon, 1997 president of the Massachusetts Building Congress (MBC), passed away on May 3 at 85 years old, after a courageous battle with leukemia.

Reardon was an active participant in the MBC organization for over 30 years. As the president of A. F. Underhill, Inc., he provided fire stopping and life safety services to many of the major construction projects in Greater Boston.

Representatives of MBC say Reardon was a consummate networker who belonged to many organizations and left his indelible mark on many, adding that his gift was to include everyone in every conversation, bring newcomers into any group he was in, and mentor all to the benefits of a personal network.

A funeral Mass was held at St. Paul Parish, Hingham, on June 3.

Like Kathy Barnes, co-founder of High-Profile, Reardon was from Cincinnati. He was instrumental in introducing HP to the MBC membership and the construction industry. In the first issue of High-Profile Monthly, Reardon, then MBC president, offered his construction maxim: “Quality, Safety, Price: Choose any two.”

I am grateful for his guidance. We will miss him.

Read Reardon’s contributions to High-Profile Monthly in the 10 Year Anniversary edition and in his 2017 article, A Decade of Change.