Branford, CT – On October 21, Blakeslee Prestress, Inc. hosted a visit from the senior class of the civil and mechanical engineering dept. of the United States Military Academy at West Point.

This was the 10th anniversary of Blakeslee hosting this event, which has become a tradition that both Blakeslee Prestress and the cadets have come to value.

The day started at about 8:30 a.m. with the arrival by tour bus of 35 cadets with four instructors, two of which were civilian. Everyone was greeted by Blakeslee employees, and three groups were formed and escorted by Blakeslee personnel into the plant where they learned the many different facets of the production facility. They were led through areas such as the quality control lab, batch plant, production, and finishing areas.

Everyone returned to the office area and divided into two groups. One group sat in a presentation of the Tekla Structures 3D modeling we utilize at Blakeslee. Topics such as product shapes and the Blakeslee Library were discussed. This was followed by a demonstration on how to make a connection along with creating framing plans, showing how changes are adapted quickly and reporting is recorded. The other group received an introduction to Precast Prestressed Concrete by Rita L. Seraderian, the executive director of PCI Northeast. The cadets explored building and bridge design solutions using precast and prestressed concrete systems and learned about the theory of prestressing and how it applies to manufacturing prestressed concrete products. The final presentation was a collage of project examples for buildings and bridges. Once each group finished they swapped rooms to complete the morning. 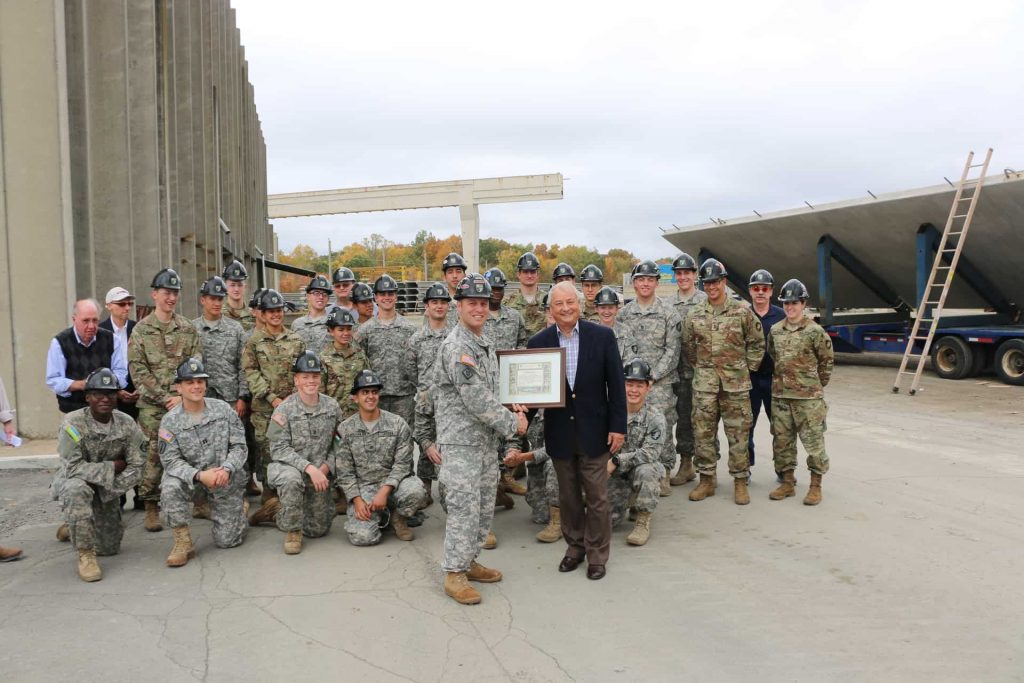 As the cadets were leaving everyone gathered to take a group photo as Lyle R. Milliman, P.E. Cpt., EN, presented Robert J. Vitelli, president of Blakeslee Prestress Inc., with a plaque that read:

For outstanding support of the West Point Civil Engineering Program while providing an introduction to structural modeling software and facility tours of your Prestress Concrete Plant. Your professionalism and technical expertise impressed upon the cadets the essential traits of successful engineers and projects, and helped contribute to their education and inspiration.

As the group boarded the bus we thought about our next meeting which would be the sponsoring of the cadets for the 2017 Big Beam Contest.

These are all extraordinary young men and women who have willingly chosen to dedicate themselves to our country, and all of us at Blakeslee Prestress Inc. are extremely proud and privileged to host this event for them. The academy’s motto is “Duty, Honor, Country.” That says it all.