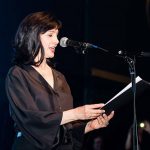 Boston – The second annual Battle of the Biotech Bands was held recently at the Royale nightclub in Boston’s theatre district.  Hosted by Emmy Award-winning arts and entertainment critic Joyce Kulhawik, over 700 guests watched bands from three biotech companies battle for charity, raising over $60,000.

The Arts and Business Council of Boston served as the fiscal agent, and co-chairs Sylvia Beaulieu of The Richmond Group and Carly Bassett of Total Office ran the event, supported by volunteers from their companies and from last year’s founding sponsors Perkins+Will.

The band Bad Idea from Merrimack Pharmaceuticals took top honors, benefiting its selected charity, Dream Day of Cape Cod, with 50% of the night’s proceeds.  Momenta Pharmaceuticals’ Aural Gavage  earned 25% of the purse for the Jolane Solomon Research Fund at Boston College, and Molecular Groove from Perkin Elmer  earned 25% for  the American Cancer Society.

Kulhawik summed up the spirit of the evening by noting how remarkable it is that “these brilliant men and women of science, who spend their days developing medicines and cures for serious diseases, can rock out with such talent and energy!”

“It is especially meaningful for us at Merrimack  to help put this worthy charity on the map, and give them the attention that their great work deserves”, said Merrimack Pharmaceuticals CEO Robert Mulroy. 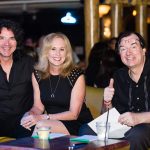 Judges included famed rocker Charlie Farren, who opened the evening with a performance of his new single “Hold me down and love me.“

Boston DJ Candy O’Terry, host of Magic 106.7’s morning show and Steve Morse, rock music critic for The Boston Globe were also judges.  Kulhawik and the judges all donated their time to this charitable vent.