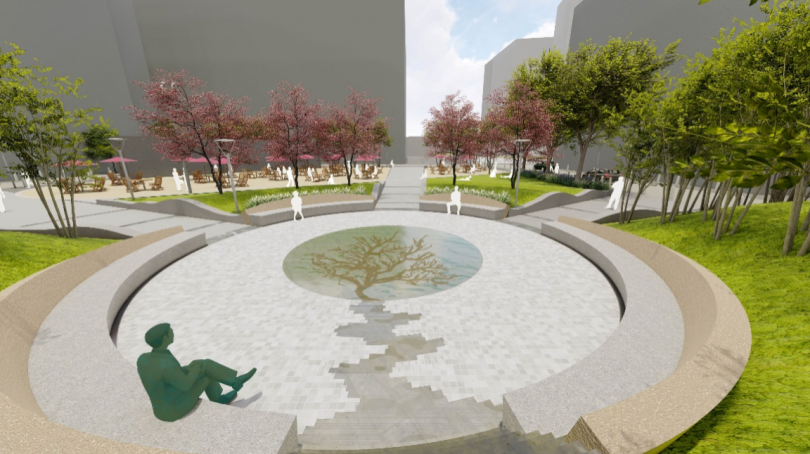 When people think about memorial design, they often think about slabs of granite with names on them, sometimes with some plantings and maybe flagpoles. While the listing of honorable names or significant events is – and should be – the most memorable part of any memorial, the design of these installations is trending to a more experiential, artistic reflection of a site and its context.

One of the first memorials to combine the notion of commemoration with art in the landscape is the Vietnam Veterans Memorial on the Mall in Washington, DC. Designed by Yale student Maya Lin and completed in 1982, the two, 10-foot stone walls inscribed with almost 60,000 names are integrated seamlessly into the landscape, respecting the site context while providing a dramatic statement and experience.

Since then, memorial design has continued to evolve toward this direction. The FDR Memorial in Washington, DC, designed by landscape architect Lawrence Halprin, does a masterful job of using granite, water features, and planting to provide a sense of intimacy and a connection to nature. Paul Murdoch Architects’ Flight 93 9/11 Memorial in Somerset County, PA, is also integrated into its rural landscape, creating an experiential journey of remembrance: “A common field one day, a field of honor forever.”

Our team is continuing this mission with a focus on creating spaces for contemplation, healing, and remembrance that also honor its context. Just as each memorial is unique, tackling the design of such projects within the landscape requires a highly tailored and hands-on approach.

In my decades of work on memorial projects, there are several lessons learned in creating a lasting symbol that respects those being honored, their loved ones, and the local community.

Honoring the Victims and the Location

We were very fortunate to be asked by the artist/sculptor Pablo Eduardo to collaborate on the design of two permanent markers (known as the Boylston Marker – Boston Marathon Memorial project) to commemorate the sites of the tragic Boston Marathon bombing on April 15, 2013. With sensitivity to the deep emotions that this project would bring out in the families impacted by this devastating event, we were honored to be involved in a relatively private design process with the City and the families to ensure that every decision was made with care and respect.

In an extremely collaborative process, the artist worked with our design team and our design visualization specialists to study and graphically document design changes. These visualizations helped the families envision the final product, especially in the context of Boston’s Boylston Street, a bustling area home to restaurants, shops, and businesses. In addition to the challenge of creating markers that reflect the impact of this tragic event, we also needed to produce a piece that wasn’t out of place in this busy urban environment.

The final design for the two marker sites started with bumping out the existing curb line to establish a sense of permanence and place for the markers, while allowing for the regular flow of activity along Boylston Street. The markers consist of three interlocking granite columns, which have been pulled apart, two at one site and one at the other, representing the three lives lost at the bombing, metaphorically permanently linked. As an added connection to the victims’ lives, the granite was sourced from sites with a personal tie to each life lost: Franklin Park, Spectacle Island, and the Boston University bridge. These granite markers sit on identical bronze bases that further reflect how the markers are joined. Both sites also each feature four illuminated glass pillars encased in bronze, representing the fragility of life.

While these features are striking and unique, they blend into the urban fabric and streetscape vocabulary, subtle yet permanent reminders of the resiliency of all affected by this traumatic event.

Enhancing a Site for Greater Significance 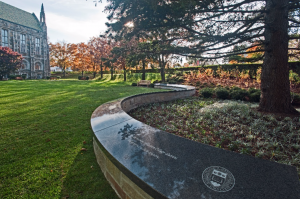 The Boston College War Veterans Memorial subtly merges itself into the topography.

While we often look to seamlessly integrate a memorial into the landscape, there are also opportunities to enhance the surrounding area for an even greater impact. Take, for example, Henri Termeer Plaza in East Cambridge, Mass.

Henri Termeer is considered a pioneer in the biotechnology industry, leaving behind a legacy of entrepreneurial culture that harnesses cutting-edge science and innovation to better the lives of patients afflicted with rare genetic diseases. He was an icon of the bio-pharmaceutical industry, and his sudden passing in 2017 was a shock to that community. This community, together with Henri’s family, looked to establish a permanent tribute to his contributions.

As a result, the group advocated for a prominent urban public open space in the heart of Kendall Square to be renamed to Henri Termeer Plaza. An artist was then retained to sculpt a full-scale bronze replica of Henri that was initially planned to be located at the perimeter of the plaza.

Our team joined the project to assist with the siting and installation of the statue. After reviewing the proposed sculpture and possible locations, we were struck by how much more compelling it might be if the park/plaza was reconfigured to provide a more intentional setting for the sculpture. Interestingly, Henri’s family was having the same thoughts.

We quickly produced design options that looked at opportunities to reconfigure the park to allow the sculpture to be more integrated into the landscape. The family and committee were thrilled with the idea and supported a complete renovation.

The sculpture is now designed to sit next to a cascading water wall feature that drains into a reflecting pool. The bottom of the pool has a sculptural tree form made of hundreds of individual pieces of bronze plate, creating a space for reflection and symbolic meaning behind Henri’s life mission. The tree symbolizes the support that Henri gave to the biopharmaceutical industry both in Cambridge and around the world, along with the growth that his leadership provided the industry.

The resulting project is an integrated program of art and landscape, permanently honoring a great man.

Merging memorial design with the landscape becomes even more challenging when the local landscape is a historic setting. When tasked with a project at Boston College, a renowned college with an iconic campus, honoring the campus setting was just as important as paying tribute to the memorial subjects.

When we were first approached by BC for a War Veterans Memorial recognizing the members of the BC family who have given their lives in service to their country, a preliminary design featured a three-sided “room” of granite pieces of different shapes with the names of the war veterans engraved on them. After making our case that the design wasn’t particularly reflective of BC and its campus, the college allowed us to explore alternative designs that were more context-sensitive.

The final design consisted of a low wall starting near a spruce tree and curving along the bank area, subtly merging itself into the topography. The wall’s granite cap contains the engraved names of the 211 BC alumni killed in conflicts from World War I through Iraq and Afghanistan. This memorial was dedicated on Veterans Day 2009 at a moving ceremony attended by families of those honored and the BC community. The highlight for me was when a respected member of the BC administration commented that the memorial “looks like it belongs there and has been there forever.”

And that’s really our goal as landscape architects – to enhance the landscape with features that look like they’ve always been a part of it. But when those features have the added job of memorializing our community’s leaders and heroes, it adds another layer of respect and reverence that sticks with you forever. 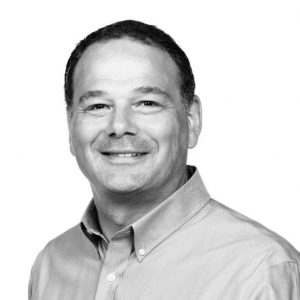