Belmont, MA – The Belmont Middle and High School in Belmont is undergoing a $295 million phased and occupied renovation, and the construction of an addition to include added facilities and incorporate grades seven and eight. Construction began in 2019 and is expected to be completed in September 2023.

CHA Consulting, Inc. (CHA) is serving as the owner’s project manager for the Town of Belmont; Skanska is the construction manager; and Perkins & Will is the designer. 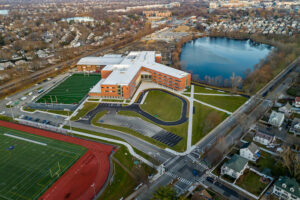 This project involved intricate phasing with the additional complexity of students occupying spaces adjacent to construction. The phasing set out to do new construction first, with 9-12 students remaining in the existing structure until they could occupy new areas of the school. Once the 9-12 area of the school was finalized, high school students moved into the new 9-12 portion of the school for the start of the 2021-2022 school year. 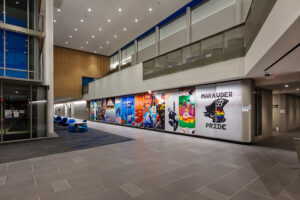 With students occupying the new high school, demolition of the existing high school took place and then moved directly to the construction of the seventh and eighth grade section of the school. All efforts were made to minimize disruption to school operations and to maintain safety and security for students, faculty, and staff. Phasing involved many moving pieces in addition to new construction, including the utilization of temporary walls, partitions and stairs, as well as temporary student drop-off areas and traffic patterns. All school operations needed to be considered and reevaluated as the project progressed. 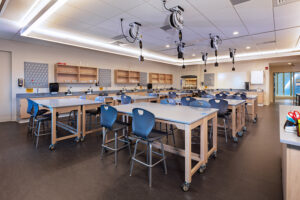 The design and construction team also faced other pain points along the way, including environmental impacts, grade reconfigurations, modernization of existing facilities, and embedding sustainability into the project at every level.