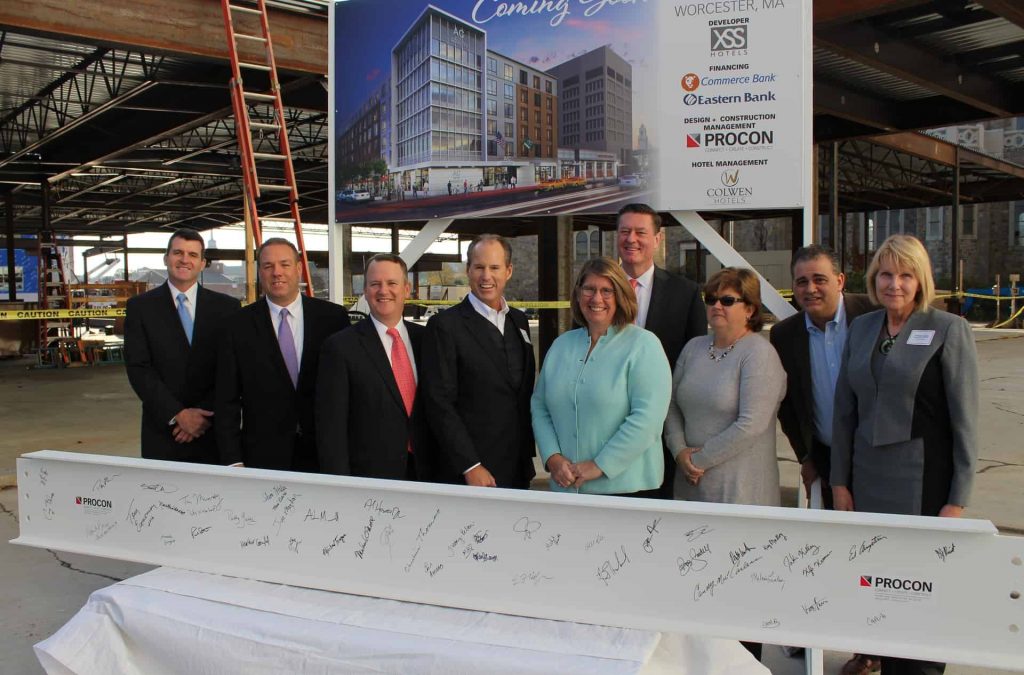 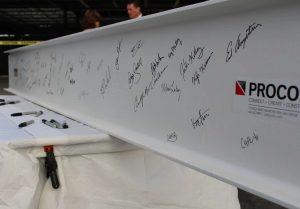 Worcester, MA – State and local officials, business leaders, and partners joined with XSS Hotels of Manchester, N.H., recently to celebrate the construction of the AC Hotel by Marriott to be located at 125 Front Street in Worcester, Mass. XSS Hotels collaborated with the Manchester, N.H.-based PROCON, the designer and construction manager for the 117,000sf upscale hotel.

Plans call for 170 king suites and double-queen guest rooms to be located on floors two through six of the building. The European-inspired hotel will offer a robust package of guest-friendly amenities.

The design concept includes a fitness center, a yoga room, a 24×7 market, conference center and meeting rooms, and a business center. Expansive public space designs feature a bar/lounge area that flows to an outdoor terrace. In addition, the 7,100sf function room will include an in-house full-service restaurant with an outdoor patio eating area.

Work began on the site in early October, and structural steel installations are currently in progress. The building is expected to be weathertight by February 2017. The signed beam will be installed towards the end of the structural steel erection, with an expected project completion in late 2017.

Worcester is undergoing a renaissance, and the new AC Hotel is part of a series of four high-profile projects that will comprise the CitySquare area, AKA, the Grid District. A 365-apartment mixed-use development is already under construction, and numerous street-level retailers and upscale restaurants are expected to set up shop within the next two years. Together, a section of downtown Worcester will be transformed into a live-work-play hub, designed to attract young professionals.

Expectations ran high, as attendees added their names and best wishes to the steel beam in celebration of the construction project that will be part of Worcester’s master plan for urban revitalization. The six-story AC hotel is ideally situated in the heart of the downtown Worcester with access to local shops, restaurants, and entertainment. It is a short walk from Union Station offering train and bus service and is just two blocks from the DCU Convention Center.

Mayor Joseph M. Petty was unable to attend, but he shared his sentiments about the new hotel in a prepared statement. “The CitySquare development and this hotel are at the heart of our plan for revitalizing our city’s core.” “Even before the construction began we started seeing the positive impact with new restaurants and businesses opening around our downtown.  I want to thank XSS hotels, and all of the partners for being part of our vibrant new vision for downtown and for Worcester as a whole.”

City Manager Edward M. Augustus, Jr. was one of the morning’s speakers. After commending all the leaders and officials who collaborated to make the hotel possible, he added,  “This hotel is another fantastic sign of the vitality and momentum we are seeing downtown and throughout Worcester. This project brings us one step closer to fulfilling the vision of CitySquare. It’s another piece of the puzzle that will fit into place alongside new restaurants, apartments, and high-class office space to help create the 18-hour downtown we’ve all been working towards.”

The Worcester AC Hotel is rising from the ashes of the demolished Galleria mall and sits atop the city’s recently opened 586-car underground parking garage; that will service the hotel and surrounding buildings. AC Hotel guests will have ample venues for shopping, dining, and entertainment at their fingertips. One of the city’s biggest attractions is the nearby DCU Center that seats 15,000 and has featured such entertainers as Sting, Miranda Lambert, and Kiss. The center hosts a variety of concerts, sporting events, family shows, conventions, tradeshows, and meetings annually.

The momentous beam signing can be summed up in the words of Worcester District 2 City Counselor Candy Mero-Carlson who said, “This is a great day for everyone and we are certainly a city on the move.”