Rendering of Boston Arts Academy at 174 Ipswich St. in Boston 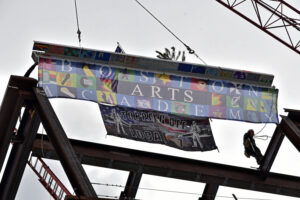 The final steel beam being raised to complete the structure of the new BAA facility at the topping-off ceremony on Feb. 23

The BAA Foundation raises essential funds through philanthropic sources to bridge the gap between BAA’s allocation from Boston Public Schools (BPS) and the true cost of a high-quality arts education.

The topping-off ceremony marked a major milestone in the construction of the new building, transforming the school’s previous facility into a state-of-the-art education institution in the heart of Boston’s ever-expanding, diverse Fenway neighborhood.

Expected to be completed by spring 2022, the new school will accommodate more than 500 students, an increase of nearly 15% from the current student body. 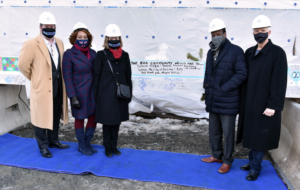 “This amazing school building will serve future generations of the most creative, artistic young minds from every neighborhood of our great city,” said Walsh.

The new five story building will expand BAA’s space from approximately 121,000sf to 153,500sf, and it will feature a bold glass facade, theatre marquee, rooftop green space, and new and greatly enhanced performance and rehearsal spaces, including a premier 500-seat theater.

These spaces will be outfitted with the latest technologies used by big-name artists and headlining entertainers, thanks to generous donations to the BAA Foundation by prominent local companies like Avid Technology. The facility will also include a gym and a health and wellness center for students.

Boston Arts Academy provides arts-intensive academic training for students from every neighborhood in Boston. Of the school’s 2020 graduates, 97% were accepted to college, many becoming the first in their families to do so. 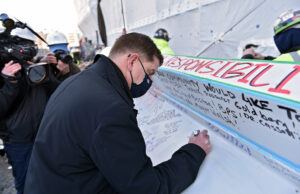 Other BPS facilities projects in development include the new Carter School in the South End and the proposed $193 million state-of-the-art Josiah Quincy Upper School building in Chinatown. In addition, the city has been approved for 27 repair projects, resulting in $41 million in reimbursement from the MSBA at various BPS schools since 2015 to create more energy efficient buildings by replacing roofs, windows and boilers.