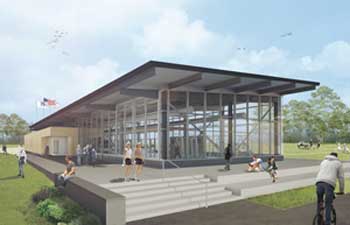 Smithfield, RI – A/Z Corporation of North Stonington, Conn. will be the construction manager for a new practice facility to be developed on the Bryant University Smithfield, R.I. campus.

The facility will be a ground-up development using a pre-engineered metal fabricated building.

The sports complex will be approximately  80,000sf and feature an indoor carpet-style synthetic sports turf for the field application for use by various sports programs, particularly football and lacrosse. The design also includes a baseball locker room and showers, staff offices, controlled storage with overhead door access, men’s and women’s lavatories, a first-aid station, and other amenities.

This is part of a major upgrade of the sports facilities planned by Bryant at its Smithfield campus and in Zhuhai, China, adding more than 250,000sf of innovative facilities at the two locations.

The program is being made possible by more than $15 million in leadership gifts to Bryant’s capital campaign.

Under the leadership of University President Ronald K. Machtley, the historic Bryant Builds initiatives include a new entrance, integrated landscape, and point of arrival. A 50,000sf academic innovation center is scheduled  to open in the fall of 2016, and a Bulldog Strength and Conditioning Center will be completed in  2015.

Other improvements include enhancements to the Elizabeth and Malcolm Chace Wellness and Athletic Center, including a sports medicine and training center; and Bryant University Zhuhai, a joint venture with Beijing Institute of Technology Zhuhai campus.

Bryant’s Chinese partners have invested 100% of the capital for this project.