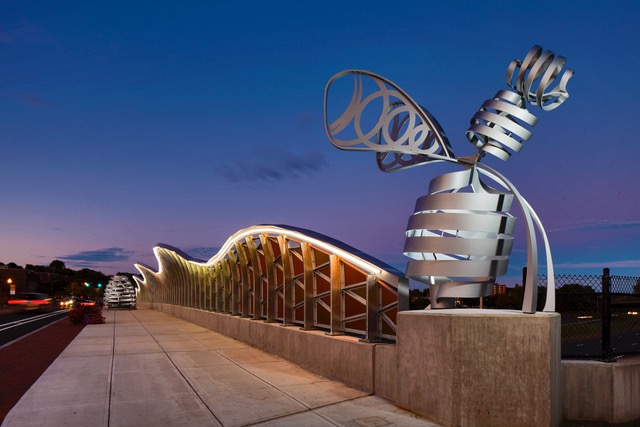 Demonstrating the value of art in the public realm, the sculpture-lined Beehive Bridge in New Britain, Conn. — with artwork and design innovation by Svigals + Partners — has become a touchstone of a major community-wide festival this week.

The Beehive Bridge, which reunites two halves of New Britain separated a decade ago by a highway project, will be the namesake and focus of the first Beehive Bridge Festival to be held Sept. 18, announced by the city’s Mayor, Erin Stewart. Taking place from 5-10 p.m., the festival is an over-21 event ticketed at $15 per person, with music performances and several food trucks offering varied cuisines, beers and wines.

The concept for reimagining the 265-foot-long overpass borrows from the “beehive” theme of New Britain’s official seal. Noted for stunning visual impact, colorful translucent panels in a honeycomb pattern separate the overpass visually from the highway, and glow at night with color-changing LED illumination. Four large-format stainless-steel honeybee sculptures bookend the bridge, and a large ‘hive’ installation anchors the center.