It’s not often that architects have the opportunity to work alongside a consistent client team over the course of decades. JCJ Architecture had the honor of doing just that, for the duration of a 20-year, three-phase project to expand the physical footprint for Wesleyan University’s School of Film Studies. Originally known as Wesleyan’s Department of Film Studies and Cinema Archives, the program has been transformed over the last two decades to become the College for Film and the Moving Image. Under the guidance of the program’s founder, Jeanine Basinger, JCJ had the opportunity to engage in a deeply collaborative relationship with faculty and university leadership to create a unified facility worthy of Wesleyan Film’s status as a leader in its field. The power of interdisciplinary collaboration is reflected throughout this project, from the design process to the everyday student experience. 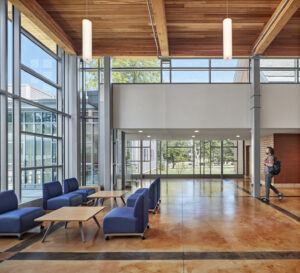 The newly named Jeanine Basinger Center for Film Studies comprises two distinct programs, one for the historical, formal, and cultural study of film, and the other for the preservation of primary documents and artifacts. Our team worked with the client to ensure that the new center seamlessly unites these programs. Previously scattered across the campus in makeshift facilities, the project brought all components of the program together into a single facility. The building was designed to support the department’s unified approach to production and study, fostering students’ understanding of film theory, history, and the craft of filmmaking.

The Kinship of Architecture and Film

Early on in our work we began exploring the distinct kinship between architecture and film as art forms that similarly rely on the manipulation of light to reveal the depth of their craft. This relationship between light, film, and architecture ultimately became a guiding principle throughout all phases of the project. Learning and collaboration spaces throughout the entire center prioritize daylighting, in recognition of its importance to students and faculty who spend so many hours in the dark. 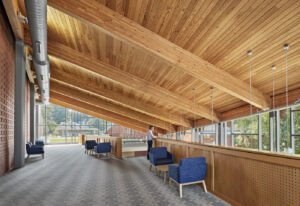 The new center provides a recognizable home for the program and a gathering place for the larger Wesleyan community. The university recognized the importance of providing students with an environment for the kinds of serendipitous encounters that are so critical to the creative process. The new center’s public lobby acts as a cultural hub, inviting students from all areas of study to convene and find opportunities for spontaneous interaction and social cohesion.

Born from a true interdisciplinary collaboration, the Jeanine Basinger Center for Film Studies reaches beyond its defined programs and creates a learning space for students across all disciplines. Moreover, the building has become a front door to the local community, film industry luminaries, and a large contingent of Wesleyan alumni who regularly return to lecture and teach. It often serves as a venue for public events and film screenings. With phase 3 finally completed in August of 2020, the center will serve as a symbol of creativity, connection, and community for decades to come. 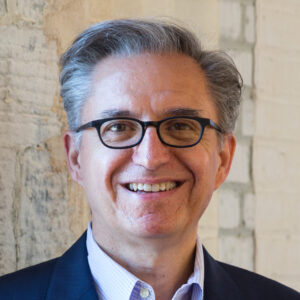