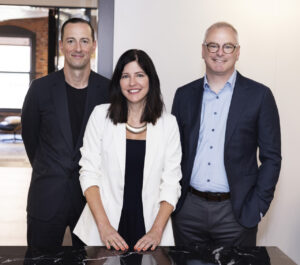 Spagnolo will lead and oversee the business of the practice including overall fiscal responsibilities and firm-wide operations. He will lean on his many years of organizational leadership in multiple industries including retail, architecture and design. For the past seven years he has modernized SGA’s business practices, opened the firm’s NYC office and managed its growth.

For 17 years, Sullivan has led the firm’s many large-scale projects in the commercial, technology, life-sciences, and academic markets and often plays a major role in master planning, conceptual design, and the public approvals process. He will lead the firm’s architecture practice focusing on design leadership and client management.

Clarke has earned many honors and awards during her career, including 18 at SGA. She has been involved in the expansion of the firm’s interior design practice and is an ambassador throughout the market. In addition to leading interior design commissions and overseeing the science and technology discipline, she will manage the firm’s human resources department.