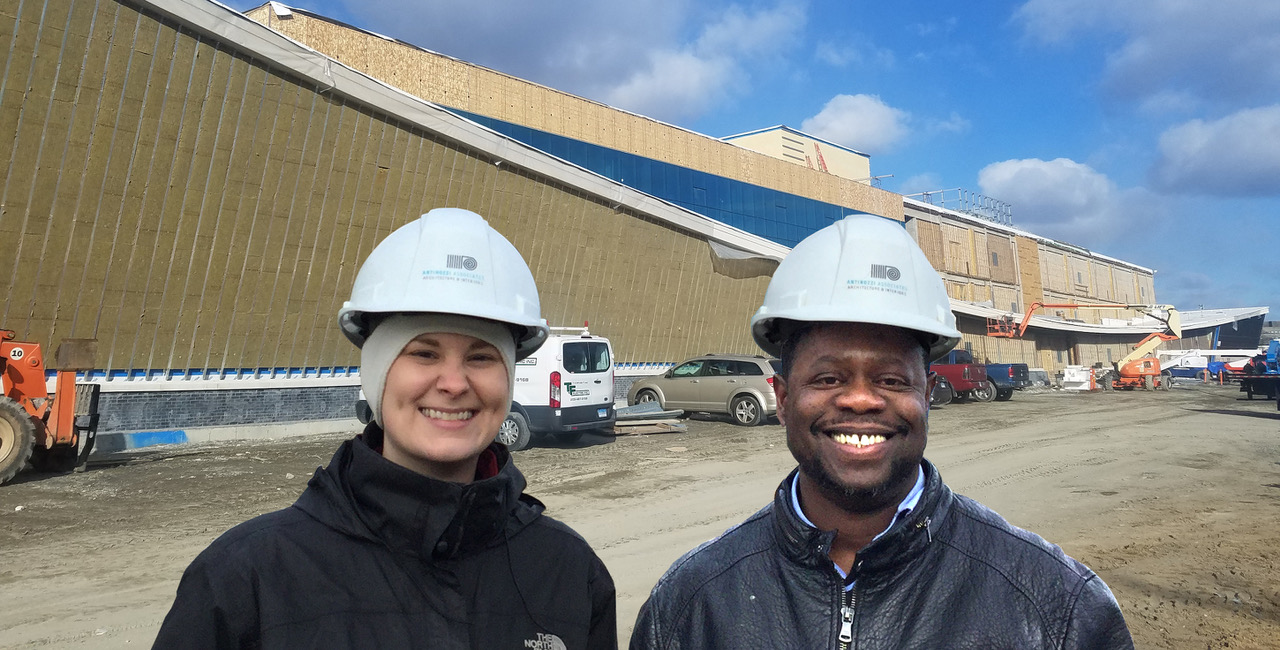 Bridgeport, CT – For architect David Ferris, an associate and senior project manager for Antinozzi Associates, there is so much more to designing a school building than just providing four walls and a roof.

“There are so many opportunities for what we do as architects to impact how a person feels and interacts with their surroundings, without them even knowing it,” he said.

It’s at the intersection of art and science, where Ferris and his colleague Shannon Hovan, a firm team member and the construction administrator on the project, see how Bridgeport’s Harding High School project can impact not just the students who will be learning inside the building, but the entire neighborhood, and possibly the entire city.

An ambitious outlook to be sure, but the construction project is the first entirely new high school to be built within a city neighborhood. Fairchild-Wheeler Interdistrict High School, which serves Bridgeport and seven other towns, was built on the edge of parkland on the Bridgeport-Trumbull border.

Ferris and Hovan work together on Harding. She visits the site weekly to ensure the construction documents are being followed, checks in with the contractors, and ensures that the entire building is being built according to the design documents.

The earliest definition of neighborhood described a collection of buildings usually anchored by a school or a place of worship. “What we’re creating at Harding will be just that — a place for students to learn, a gathering place for the community nearby, for the entire city,” Hovan said.

The south wall of the school features a foldaway wall that will open the auditorium to the outside to provide a space for concerts and other outdoor events.

The 244,500sf, four-story building was designed by Paul Antinozzi, principal at Antinozzi Associates, and will accommodate more than 1,150 students when it opens late this year. It will include state-of-the-art computer labs, virtual and traditional science labs, a graphics lab, music rooms, art classrooms, a new mentor program area, and additional educational and athletic spaces. It will also feature a state-of-the-art performance auditorium and media center spaces, as well as a fully functional mini-health services center.

“Marrying this school to the neighborhood was so very important for me,” said Antinozzi. “It gave our staff an opportunity to stretch, to grow, to contribute.”

“This has been a big learning curve for me,” Hovan said, of the leap from overseeing construction documents at her desk to actually being on-site, working with contractors and seeing the “constructability” of the building come to life.

Hovan was exposed to architecture while still in high school. She took part in the ACE Mentor program and was paired with two architects at the firm. She received her BFA in Architecture Design at UMass Amherst, and then pursued her Master’s Degree in Architecture at Temple University. A few months after graduation, she came to work at Antinozzi and has been there ever since.

Ferris  has been practicing for 24 years. He came to Connecticut from the U.S. Virgin Islands via upstate New York. He’s worked for Antinozzi for the past 13 years, moving from the firm’s Stratford office to its current downtown Bridgeport office. Ferris is dedicated to giving back to his adopted community, and has been extensively involved with the Harding project as the Antinozzi Project Manager since the inception. “It’s been quite a process,” he said, describing the numerous hurdles the City had to overcome in order for shovels to hit the ground.

Ferris is a big booster of the ACE Mentor program at Antinozzi – ACE stands for architecture, construction, and engineering. “I’ve spent a lot of time visiting schools and working with students throughout the City,” Ferris said. “I enjoy talking to students to let them see there is a future, a career path for them in the Tield of architecture,” he said, adding, “I wish more students would take advantage of the program, especially in inner-city schools in Bridgeport. “Once they see how art and architecture intersect, they are fascinated.”