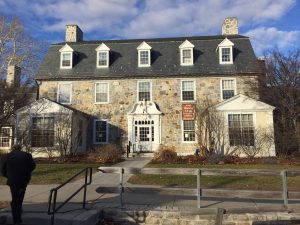 Amherst, MA – Finegold Alexander Architects has been awarded the design study contract for the proposed renovation and addition for the Jones Library on Amity Street in Amherst.

The project may expand to upwards of 60,000sf to 80,000sf and include a modernized library with small, quiet study rooms, a computer training lab, a youth activities room, a café-like space, a sales area for library mementos and the Friends’ Book Sale, self-serve holds, and an automated materials handling system.

The library will also feature a special collections area including works by Robert Frost and Emily Dickinson that will draw people from all over the world.

Project cost is expected to be up to $40 million, with a large portion paid by the Massachusetts Board of Library Commissioners and and through fundraising in the community. Library officials plan to maintain or recreate the Kinsey Memorial Garden to strengthen connections to the adjacent Amherst History Museum, also known as Strong House.

The library was established in 1919 through a trust from local Amherst lumberman Samuel Minot Jones and was originally designed by Allan Cox of the Putnam & Cox architecture firm in 1928.

The original intent in 1928 was to design the library in with a residential, ‘home-like’ atmosphere, to encourage attendance from the community and its students. The Jones Library was also one of the first libraries to house a public auditorium space for community performances and gatherings.

“One of the deciding factors in choosing Finegold Alexander was the recently completed work they did at the Holyoke Library. It was really pretty impressive,” Tamson Ely, a trustee representative to the subcommittee, said of the Holyoke project. “The trustees were looking for an architect to develop a plan that honors the history of the 88-year-old building while bringing it into the 21st century.”

“This is the kind of project that taps the strengths of our firm, and we look forward to combining our talents to restore the historic town library to one that is as architecturally significant as it was when originally built, with the amenities that libraries today require,” said Tony Hsiao, Principal and Design Director.