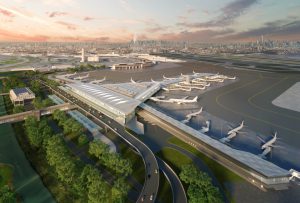 A rendering by GRIMSHAW of the new Terminal One at Newark Liberty International Airport.

Newark, NJ – GRIMSHAW, in partnership with STV as Lead Design Firm, will serve as the Lead Design Architect with the joint venture team of Tutor Perini/Parsons for the $1.41 billion terminal at Newark Liberty International Airport. The team was chosen by the Port Authority of New York and New Jersey-based on its combined experience and expertise in the successful delivery of design-build projects.

The project is the largest transportation infrastructure design-build contract in New Jersey state history and is expected to begin construction in April. Once completed in 2022, Terminal One will replace the adjacent Terminal A building and will include additional amenities, a more efficient check-in process and ample space for passenger amenities and an efficient security screening process.

The new Newark Airport Terminal One will feature 1 million sf of space with 33 gates spread across a two-level T-shaped building. The design is intended to accommodate the airport’s growing capacity while meeting the changing demands of passengers and airlines in the future.

Passenger volume at the existing Terminal A is expected to increase by 23 percent over the next five years and by a third by 2032. Terminal 1 will position EWR to successfully accommodate a rapidly changing industry and unprecedented levels of growth.  New technologies and systems will continue to appear, and the new Terminal 1 will be able to embrace the challenge of adaptation as EWR expands over time.