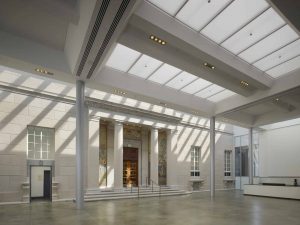 Cambridge, MA – Acentech is providing a variety of consulting and design services for projects at six museums around the country. The new projects for the Currier Museum of Art, Massachusetts Museum of Contemporary Art (MASS MoCA), Museum of Fine Arts Boston, Museum of Science Boston, University of Iowa Museum of Art, and Yale Center for British Art add to the firm’s extensive portfolio of museum spaces. Acentech brings critical expertise in the areas of noise, vibration, and audiovisual consulting to these sensitive cultural landmarks.

The Currier Museum of Art in Manchester, New Hampshire, has been one of the country’s finest regional museums since its founding in 1929. Ann Beha Architects completed a master plan to make the museum more visible, accessible, and attractive to a broader and more diverse audience, and designed a 30,000sf expansion to provide a new entrance, educational spaces, and gallery space for permanent and special exhibitions. The design features places to pause and enjoy views of dramatic interior spaces, including an enclosed Winter Garden. Acentech consulted on architectural acoustics for the expansion project, focusing particularly on good hearing conditions in the auditorium and noise control in the Winter Garden.

Located in North Adams, Mass., MASS MoCA is one of the largest centers for contemporary visual and performing arts in the country. Working with Bruner|Cott Architects, Acentech was engaged to conduct an acoustical study for the renovation of MASS MoCA’s 120,000sf Building Six and 5,000sf Building Eight. Spaces in these buildings include 12 to 16 media galleries with potentially loud sound installations, visual arts galleries, workshop spaces, and lobby and circulation areas. With the existing floor structure consisting of wood decking on wood joists, MASS MoCA wished to keep the wood exposed as much as possible while achieving a high degree of sound isolation for the media galleries. Acentech’s participation in this project will aid in the harmony between the building’s aesthetic and functionality.

The Museum of Fine Arts Boston (MFA) was planning for a new laboratory space in its historic Huntington Avenue building. Those plans included a scanning electron microscope (SEM) used to quantify the composition of elements and materials in museum specimens. The SEM, already housed in another area of the facility, was to be moved to this new renovated space, which was closer to light rail lines and a major roadway. Concerned about the effects of vibration from these sources to the SEM, the MFA hired Acentech to study the vibration of the new space. Acentech’s consultants measured the floor vibrations at the SEM’s current location, and compared them to measurements taken at the new site. It was found that the vibrations at the new site, which was at grade level, were lower than the current space, which was on an upper level floor. Therefore, no extra vibration mitigation was needed to ensure that the microscope would properly function.

Previously, Acentech consulted on architectural acoustics, audiovisual systems design, and mechanical system noise and vibration control for two additions to the MFA, the Art of the Americas Wing and Ruth and the Carl J. Shapiro Family Courtyard.

Acentech provided audiovisual system design consulting services for a new sound system in the Blue Wing of the Museum of Science Boston. The challenge was to provide a permanent system that could be used for a variety of events, yet also removed when not in use. Acentech’s design included a portable primary speaker system to cover the main floor near the stage and supplemental speakers to cover the remainder of the floor, perimeter galleries, and upper balcony. These supplemental speakers are delayed to be time-aligned with the main speakers, providing coverage deeper into the space and maintaining high levels of speech intelligibility in the large, voluminous space.

Additionally, the speakers on the upper level, when not in use with the main system, may be used independently for presentations at the current Science & Technology Center demonstration area. Museum staff can easily select between two presets that switch the function of these speakers. Acentech worked very closely with the AV staff at the museum to ensure that equipment locations and cabling pathways were well-placed and documented. The project design and installation were completed in several weeks, with installation work limited to museum off-hours.

University of Iowa Museum of Art

After the June 2008 flooding of the University of Iowa Museum of Art’s (UIMA) former Riverside Drive home, the building was deemed unsuitable for the return of artwork. Fortunately, the UIMA collection was salvaged, and two spaces in the Iowa Memorial Union (IMU) — the Black Box Theater and the Richey Ballroom — were designated and subsequently renovated as exhibition space. Acentech completed real-time construction vibration monitoring in both spaces while the IMU underwent its own flood damage reconstruction. The vibration monitoring helped ensure that the art wouldn’t be adversely affected by construction-related vibration in and around the IMU facility.

The Yale Center for British Art was designed by the internationally acclaimed American architect Louis I. Kahn and honored with the prestigious Twenty-Five Year Award by the American Institute of Architects in 2005. The center’s landmark building is in the midst of the second phase of an interior building conservation project that will allow the center’s collections to be experienced in newly refurbished galleries and will bring vital systems, spaces, and amenities up to state-of-the-art standards for future generations to enjoy. Concerned that construction-related noise and vibration may have adverse effects on both the art collections and the staff, the center engaged Acentech to conduct baseline measurements and continuous real-time monitoring during construction. In addition to ensuring the preservation of the collections, the monitoring serves as a communication tool between the construction team, the center, and Yale Office of Facilities. The center is expected to re-open in spring 2016.