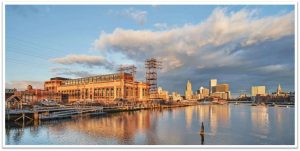 Providence, RI – The American Council of Engineering Companies of Massachusetts (ACEC/MA) has named Odeh Engineers, Inc. as a 2019 bronze award winner for engineering excellence for their work on the South Street Landing in Providence.

South Street Landing consisted of the renovation and adaptive reuse of the former Narragansett Electric Power Station, which is now home to the Rhode Island Nursing Education Center, a shared state-of-the-art facility for the University of Rhode Island and Rhode Island College, and administrative facilities for Brown University.

Using a collaborative approach to the design, extensive high-tech testing and analysis, and creative engineering solutions, the South Street Landing team pulled off a radical transformation of the 1920’s power plant. Instead of an eyesore, this important building is now the anchor for a new wave of development on Providence’s historic waterfront.