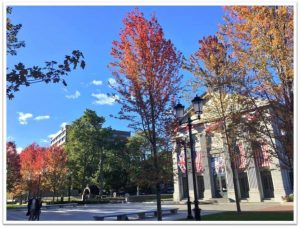 Quincy, MA – The American Council of Engineering Companies of Massachusetts (ACEC/MA) has named Woodard & Curran, Inc. a 2019 bronze award winner for engineering excellence for their work on the Hancock Adams Common in Quincy.

Hancock Adams Common is a vibrant new urban public park showcasing Quincy’s significance in American history. Completion of the more than $20 million project required relocation of a four-lane street and coordination of dozens of stakeholders and project consultants.

Though only recently dedicated, the Common already sees significant use by both residents and visitors and is a major factor drawing new development to the city’s downtown.

Quincy’s Mayor Thomas Koch said the Common’s dedication ceremony represented a great day for the city and it is a point of pride for all involved.