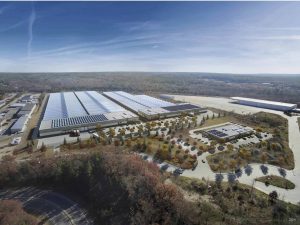 The MMCC design is one of the largest and most technologically advanced cannabis cultivation facilities in the nation.

The nearly 1,000,000sf project will consist of multiple planned phases for tenants in the Massachusetts medical marijuana market. The first phase of the project, in Building A, consists of 130,000sf of cultivation and processing infrastructure, which can be expanded to approximately 600,000sf, based on patient demand.

When fully developed, MMCC is projected to create over 300 jobs, with an annual projected payroll of over $14 million to the local community.

Through AmeriCann’s Preferred Partner Program, the MMCC facility will be leased exclusively to companies that have received a provisional or final registration to cultivate, process, and sell medical cannabis by the Department of Public Health.

“We believe the MMCC project will create a center of excellence and set a new standard for the entire cannabis industry for quality control, efficiency, and sustainability,” stated Ben Barton, CFO and Founder of AmeriCann. “Utilizing advanced greenhouse technology for cultivation provides our partners with the ability to produce superior sun grown medicine with far less energy and a reduced environmental impact.” MMCC is the first planned and approved greenhouse project in the Massachusetts medical marijuana market.

The company plans to utilize the Cannopy system in the building of similar facilities in additional states and is actively seeking suitable locations for expansion..

AmeriCann has been in discussions with Freetown officials for over a year and the town has provided strong support for MMCC. The Freetown planning board gave unanimous approval to the development plans in a public forum on December 8, 2015. Planning Board Chairman, Kevin Desmarais, closed the meeting by saying, “This has been one of the better public processes with which I’ve been involved. I’d like to thank the applicant [AmeriCann] for being such a professional outfit.”

The legal cannabis industry has experienced dramatic growth throughout the nation in recent years. Twenty-four states and the District of Columbia have legalized the use of medical cannabis and as many as ten additional states are expected to regulate cannabis by ballot initiative or legislatively during 2016.

The Massachusetts Medical Use of Marijuana Program, which was approved by voters in 2012 by a wide margin, continues to be one of the highest regarded markets by industry experts even with the first dispensaries having only recently opened.

A ballot initiative to allow for full marijuana legalization has received the necessary signatures and is expected to be on the November 2016 ballot for Massachusetts voters. “The state [Massachusetts] could become one of the biggest regulated cannabis markets in the country; bigger than Colorado and Washington State,” according to Marijuana Business Daily. The Boston Globe recently reported the regulated cannabis market in Massachusetts may exceed $1,000,000,000 by 2020.