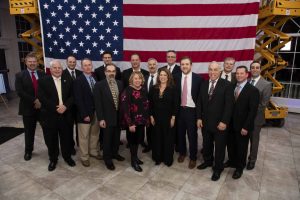 Rocky Hill, CT – Associated Builders and Contractors of Connecticut (CT ABC) recenty hosted its 14th annual Excellence in Construction awards ceremony on January 28, 2016 at the Aquaturf in Southington, CT with nearly 700 professionals from the industry in attendance. The event, emceed by ESPN’s Doug Kezirian, honored construction companies and subcontractors who performed work on outstanding construction projects completed as of October 2015. The Excellence in Construction award ceremony was held in conjunction with the association’s annual dinner where the 2016 Board of Directors & Officers were sworn in with Tim O’Brien of KBE Building Corporation as Chair, Dave Thompson of Allstate Fire Systems as Vice Chair, Norman J. Yester, CPA of Nicola, Yester & Company, P.C. as Treasurer and James LaRosa of LaRosa Building Group, LLC as Secretary. New board members Bruce J. Brown of Cianbro Corporation, Joseph Natarelli of Marcum LLP, Vincent Savino of Action Air Systems, Inc., Victor Serrambana, Jr. of  VMS Construction Company and Eugene Torone of S/L/A/M Construction Services were also sworn in. 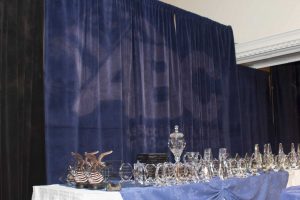 Of the 38 STEP safety program participants in the CT chapter, the following contractors entered and won a “Best of the Best” safety award:

A new award this year was introduced by the CT ABC Safety Committee. The Safety Professional of the Year award went to Rob Pellegrini of ENCON, Inc.

The Excellence in Construction and Merit Award winners are projects submitted to this annual competition and judged by an independent panel of judges which include architects, engineers and university professionals. Project submittals must adhere to rigorous application requirements for consideration of the year’s top honors. Contractors must not only demonstrate outstanding quality in construction and references from the project owner, but also rigorous safety performance.

The year’s Best in Show was awarded to Cianbro Corporation for the Mystic River Bascule Bridge Rehabilitation Project. This top designation was chosen by the panel of judges as the year’s best of the best. This nearly 100 year old structure, only one of two remaining Thomas Ellis Brown designed bascule bridges in the United States, and listed on the National Register of Historic Places, underwent a major rehabilitation that was extremely unique and performed over three seasons.