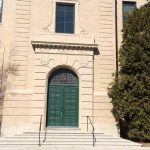 Watertown, MA – Abbot Building Restoration recently restored the pre-cast stone and brick façade of St. Joseph Hall in Watertown. Currently consisting of 25 affordable senior housing units, this historic five-story building was built in 1935 and was the former site of the Rosary Academy High School until it closed in 1981.

The masonry restoration was part of an overall interior and exterior renovation overseen by Curtis Construction of Quincy, the general contractor on the project.

Abbot’s major focus involved replacement of the pre-cast stone and the entire set of stairs as well as to replicate and replace the ornamental dentil detail above the door to the east entrance. In the course of this effort, Abbot removed a section of the shelf and dentil molding to fabricate a mold to replicate the original profile of the section. Further, Abbot replaced the panel above the door with the signage, and installed a new panel with letters to match the original font.

In addition, Abbot power washed the entire façade to remove atmospheric dirt and debris, repointed areas of the brick as necessary, and repaired the precast concrete around the perimeter of the building.  To complete the project, Abbot coated the precast stone with an elastomeric coating and waterproofed all of the brick with a clear sealer.