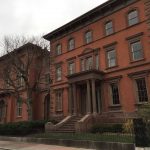 Salem, MA – Abbot Building Restoration of Boston recently completed the historic restoration of the exterior façades of the Philips Library & Plummer Hall at the Peabody Essex Museum located in the Essex Institute Historic District in Salem.

The most significant feature of the project was the complete disassembly and replacement of the library entrance portico. The deteriorated fluted columns and capitals were removed, matching columns and capitals were fabricated, new perimeter dentil band stones were installed, and the portico was rebuilt to match the original. In addition, the portico ceiling was framed in wood and a new roof was installed.

The project also consisted of the following components:

Philips Library is a rare books and special collections library best known for holding the original 1692 Salem witchcraft papers and the early works of Nathaniel Hawthorne. The Philips Library Reading Room is located in Plummer Hall.