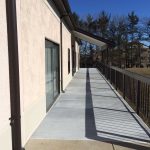 Brookline, MA — Abbot recently restored the elevated concrete walkway located behind one of the classroom buildings at the Dexter Southfield School in Brookline.

Abbot was initially contacted by the facilities director at the school to investigate the problem. Subsequently, the school decided to bring in its general contractor, C.E. Floyd Company, Inc. of Bedford to oversee the project.

Based on the findings, it was determined that the concrete walkway, the steel decking, and sections of the supporting steel all had to be removed.

To remedy the problem, new steel was fabricated to support the new decking, and new 5000 PSI concrete was poured and finished to meet the school’s specifications.