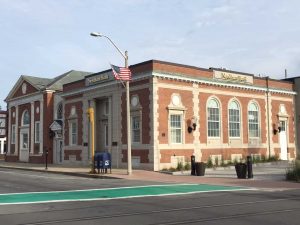 Needham, MA – Needham Bank is a neighborhood community bank with its main facility located downtown and has multiple branches around the western suburban Boston area.

In early 2015, the owners decided to embark on a three-phase renovation project at the Needham location, encompassing restoration of the interior and exterior of its main facility, constructing a new entrance from the parking lot side, and building a new operation center.

Abbot was contracted by Delphi Construction of Waltham, the general contractor for the project, to restore the façade of the main facility. This involved cleaning the brick and cast stone, repointing all of the brick with matching mortar, and repairing and replacing the stone as required.

The most complex part of the project involved three large arched windows on the side of the main building. The two outer windows had a precast stone section under the windows, whereas the middle window had brick. To establish a consistent appearance, Abbot removed the existing brick from under the middle window and installed precast stone that was fabricated to match the shape and color of the stone under the windows on either side.