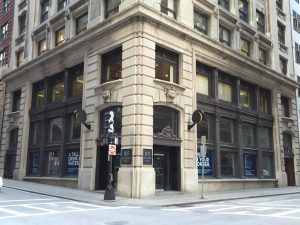 Boston – Abbot recently completed emergency repairs to a 10-story mixed-use building located at the corner of Devonshire and Milk streets in downtown Boston.

Constructed primarily of limestone and ornamental cast iron on the first and second floors, the high-rise building offers retail space on the first floor and offices on the upper floors.

After a section of the ornamental cast iron dislodged and fell to sidewalk from an area adjacent to the second-floor windows, the owner’s agent, K & S Partners, immediately contacted its engineering consultant, D. M. Berg and Abbot, to troubleshoot the dangerous condition.

An aerial lift was immediately brought on-site for the consultant who, along with Abbot, performed a comprehensive inspection of the area from where the cast iron section had dislodged.

It was determined that the deterioration that led to the debonding was caused by water intrusion through the limestone gutter trough situated on the horizontal shelf of the third-floor ledge. Over the years, the trough had

deteriorated and caused leaking through the joints, eventually penetrating the cast iron and rusting the attachments.

After making the temporary repairs to the ornamental cast iron, Abbot was contracted to cut and point all of the limestone joints from the ground level up to and including the third floor. Abbot also resurfaced the ledge and trough with an elastomeric waterproofing.