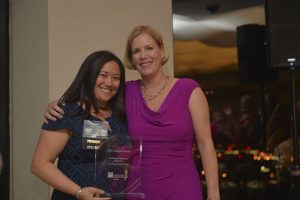 Presented at the annual SMPS Boston Awards Gala on June 9, the Marketing Professional of the Year Award honors an A/E/C marketing professional who has significantly contributed to the success of his/her firm and actively participates as a member in the SMPS Boston Chapter.

With more than 20 years of experience in sales, marketing, and public relations, Shelby founded Rhino PR in 2004. Her successful model of integrating PR and marketing with a strategic plan, and focusing on impacting companies’ bottom lines, has delivered measurable results for Rhino clients. In 2012, she was named Entrepreneur of the Year by CREW Network (formerly NEWiRE).

Rhino PR and Arup, a multidisciplinary engineering and consulting firm, together received a 2016 first place SMPS Boston award for their media relations campaign for the Echelman public art sculpture installed over the Rose Kennedy Greenway.

Chuck Raymond, CPSM, marketing manager at Geosyntec Consultants, Inc. and a Rhino PR client, nominated Susan for the SMPS Boston Marketing Professional of the Year Award. In his nomination, Chuck wrote: “If there is one member of SMPS Boston who truly deserves to be bestowed with the Marketing Professional of the Year award, it is Susan Shelby. Susan’s passion for SMPS and all that it can offer is always plainly evident. She never hesitates to give of her time and other resources to the benefit of SMPS Boston and its members, and we are all the better for it. In my opinion, this type of award is long overdue.”

Shelby has presented extensively on PR and marketing topics for many industry organizations, including national and regional SMPS conferences. She was named a Fellow of the Society for Marketing Professional Services (FSMPS) in 2012, a distinction that represents the highest level of experience and leadership in marketing within the design and building industry.