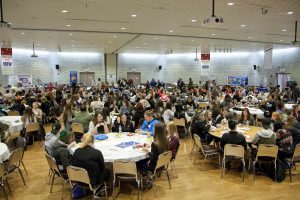 Boston – The Carpenters union was part of a group that recently held a conference and career fair in Boston called Massachusetts Girls in Trades. The first of its kind in Massachusetts, it drew 400 high school girls who were interested in the construction trades. The event sold out, and another session is being planned.

Not only did they talk to the girls, a separate group of sessions educated their instructors about unions, apprenticeships, and how they and their students can tap into training and career opportunities in the trades.

Each year, the New England Regional Council of Carpenters (NERCC) holds a Training Expo at the New England Carpenters Training Center (NECTC) in Millbury. Over a thousand high school vocational students and their instructors visit the facility, learning about apprenticeship opportunities and the union.

Participating schools are asked to encourage female students to attend, and the numbers increase year by year.

For several years, Building Pathways, started in Boston when now-Mayor Marty Walsh was head of the Building Trades, has made an energetic outreach to women and minorities, including pre-apprenticeship training. Rep. Skidmore has been involved and helped start a Building Pathways program in New Hampshire. It has been widely praised.

The New England Regional Council has developed a group named Sisters in the Brotherhood, a mentoring and resource effort. They also work with government and development agencies to implement diversity goals and plans for projects, including the Boston Plan. Not only are goals being implemented, but they’re being met through efforts by the union and its contractors.