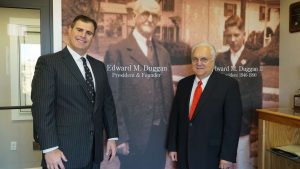 Canton, MA – “Sophisticated,” “efficient,” “committed,” “cutting-edge,” and “mavericks” are just some of the words that industry, union, and political leaders use to describe E.M. Duggan. In 2016, the fifth-generation, family-run Massachusetts company turns 125 years old.

In 1891 Ed Duggan started out as a mom and pop shop; since then, they have become a more than $165 company operating out of four massive buildings in Canton and another in Boston. Their drive and perseverance makes them one of the oldest family-run HVAC, plumbing, and fire protection companies in the country. As the business grew, Edward Duggan II fostered a culture of high standards for both its clients and workers. 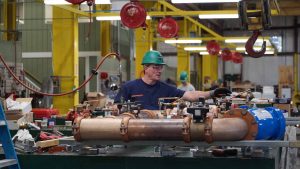 “I would say that E.M. Duggan is one of the most sophisticated subcontractors in the industry today,” states John Fish CEO, Suffolk Construction. “I think the use of technology, their appetite for innovation, the desire to do things efficiently with a high level of quality, is unmatched in the industry and we’re just proud to have a wonderful relationship with the Duggan family.”

In 1979, Vincent Petroni joined the company, representing the fourth generation. With the help of the past and present management team, Petroni took E.M. Duggan from a $2 million to $3 million company in revenues to more than $140 million in 2014, all the while never forgetting about the employees and company legacy. “You treat people with respect the way you want to be treated,” states Vincent Petroni, E.M. Duggan CEO, president, and CFO.
In 2009, Len Monfredo carried on the Duggan way of keeping the family-friendly atmosphere while continuing to catapult the company to the next level. Monfredo represents the fifth generation, and as executive vice president he fosters even more great relationships with both employees and outside vendors. “In today’s world we have state-of-the-art technology and equipment, but it’s our people that run and operate the technology that make us leaders in the industry. There is no doubt that our people are what make E.M. Duggan so successful, and we appreciate and applaud each and every one of them.”
In 1967, E.M. Duggan was the first to add a prefabrication shop, a safe place for workers to assemble parts rather than being subjected to the outside elements as a high-rise is being built. They now have two prefab shops spanning 100,000sf.
“I just think that they pay attention to the culture. If you look at some of the things that they’ve done here, just as far as making the guys comfortable, you know, where they’re going to work, the safety, the lighting, they’ve put a lot of thought into what they do and they’re always thinking ahead,” states Plumbers Local 12 business manager, Harry Brett.
E.M. Duggan has left an indelible mark on the hundreds of high rises, hotels, sporting arenas, and condos they have helped build and continue to maintain with their world-class mechanical service department. In 2014, they created an E.M. Duggan Special Projects division located in the heart of Boston so they could extend their expertise to smaller buildings projects.
The company’s 125 years of forward thinking, combined with family tradition, has made them trailblazers in the industry. E.M. Duggan is proud and honored to be reaching this major milestone as a family-run company.