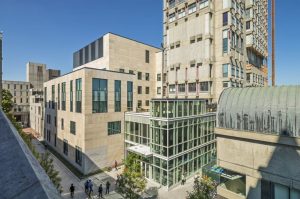 Registered for LEED Gold, the structure is a key aspect of the firm’s third project for BU. It is named for media giant and former School of Law faculty member Sumner M. Redstone, who donated $18 million to initiate the building’s construction at the center of the school’s Charles River Campus.

The School of Law’s new gateway structure is a sensitive addition to its Law Tower, one of five 1960s structures by Spanish modernist Josep Lluis Sert. These buildings were the architect’s first to be built in the United States and comprise the largest complex of his structures for learning in the world.

The Redstone Building’s opening marks a key milestone in Bruner/Cott’s innovative master plan to restore, renovate, and add to this historic site.

The building’s entry faces an open forecourt connected to the major east-west pedestrian path south of the Law School. It opens into an inviting two-story glass enclosure, or winter garden, with large open public stairs leading to the classroom levels above and below.

The second floor has classrooms and lockers, but it is also the primary student social space for the new Law School complex and a major intersection for all of its activities. Student lounges, a small dining facility, a two-story-high function space, and the main entry to the school’s library are all located on this floor. The third floor houses the additional space for the library and is connected to the other library floors by an internal stair and a dedicated elevator. The fourth and fifth floors house smaller classrooms and special-purpose instructional spaces for clinical and transactional law and professional practice education.

Bruner/Cott’s intention for the master plan is to intervene in the Sert complex to remedy shortcomings and missed opportunities in the original design without debasing its visual quality. The firm’s restoration/renovation of the Law Tower was completed in 2015, followed by additional work on the Pappas Law Library and Mugar Memorial Library.

“The Redstone Building is visually compatible with the school’s historic Sert structures but does not replicate their design,” says Founding Bruner/Cott Principal Leland Cott, FAIA, LEED, who knew Sert from his days as dean of Harvard GSD. “It provides a new and noble entry to the Law School, bringing classrooms and academic discourse out of the tower and into easily accessible spaces.”