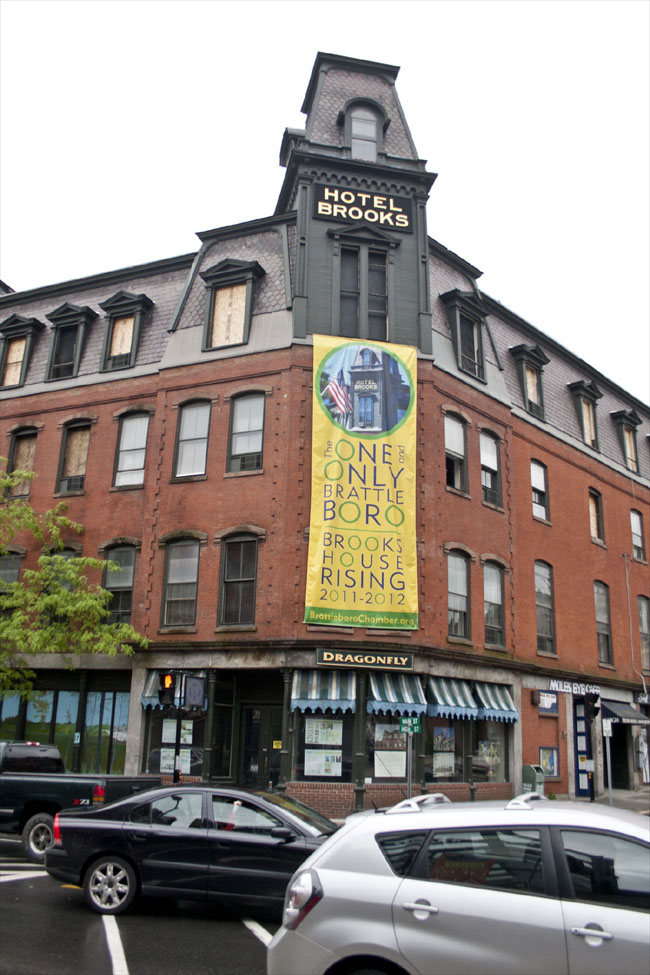 Brattleboro, VT—-The Brooks House Hotel in Brattleboro was built in 1871 and was one of the largest hotels in New England at the time. It is the prime architectural element of downtown Brattleboro with its classic Mansard Roof profile and five story turret. Over time, it was converted to 59 residential apartments and 16 commercial spaces.

In 2011, a six-alarm fire gutted much of the building destroying the homes of over 80 people. After almost two years, the building was purchased by the Mesabi Group, real estate investors who then put together funding and a plan for the $24 million restoration project. The architect, Stevens and Associates of Brattleboro, created a design that would add modern amenities while retaining historical features.

The renovated building will include 60 apartments, 10 commercial spaces, as well as a campus for the Community College of Vermont. The Bread Loaf Corporation of Burlington Vermont was selected as the General Contractor.

The overall project is scheduled to be completed this summer. As an indication of the enthusiasm and interest that the community has for this project, the Brooks House owners already have commitments to occupy almost the entire building. Soon Brattleboro will have its landmark centerpiece back as a thriving community center. 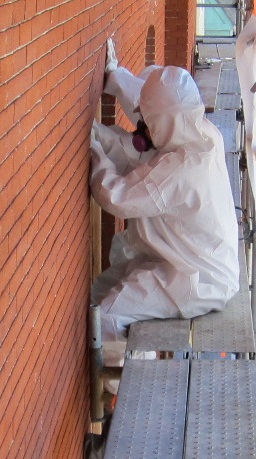 Historic Tax Credits were part of the financing package, which required the restoration of the street side windows that were not destroyed by the fire. Alpine Environmental of Chelmsford, Mass. was selected by Bread Loaf to do the window restoration and also to strip the detailed exterior window trim. Both the sashes and the trim were covered in lead paint, so the work had to be performed following OSHA and EPA work practices to protect both workers and the environment. Alpine contained the work areas with poly sheeting and

HEPA filtered negative air to prevent the lead dust from spreading. The window sashes were taken off site and chemically stripped to bare wood. This process removed all paint and glazing putty. In addition, the many areas of rotted and damaged wood were repaired with flexible epoxy. Once the repairs were completed, the sashes were repainted and ready to return to Brattleboro.

Alpine reinstalled the restored sashes into their stripped original frames using period-appropriate reproduction hardware. The traditional pulleys, chains, and sash locks help retain the authentic appearance of this historic building. To increase energy efficiency of the original drafty system, vinyl weatherstripping was installed at the sills and headers, and reproduction V-groove brass weatherstripping was installed along the jambs. In addition to saving energy, this system provides a smooth and balanced operation for the old chain and pulley windows.